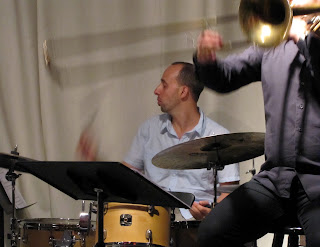 I am pleased to add one of Canada's shining lights in the world of jazz to my blog.Harris Eisenstadt's reputation in the jazz world has blossomed.

His home base these days is Brooklyn N.Y. He grew up in Toronto, studied music at the California Institute of Arts and has spent many months in Africa studying with master musicians.

One of only a handful of drummers equally well-known for his work as a composer, Eisenstadt is among the most versatile and prolific musicians of his generation.

His eclectic resume includes studies with some of the most respected names in both improvised music and West African drumming, and performances in genres ranging from film and theatre to poetry and dance to contemporary classical and opera.

Most active in jazz and improvised music, as both an in- demand sideman and a bandleader, he has performed all over the globe, earned commissions from organizations such as Meet The Composer and the American Composers Forum, and appeared on more than 40 recordings over the past decade.

You can get some insight into Harris' music when he talks about his Canada Day II project in this video. (He has since released Canada Day III)


Harris visited Calgary on a recent tour through Canada playing most of the major jazz festivals and venues as a member of the François Houle Quintet plus Benoît Delbecq. I asked him if he would PRESS PLAY> I am pleased to tell you he complied. Here's Harris' answers to some questions about the records that have influenced his music.

What have you been listening to lately? What is on your iPod, CD player, turntable these days?

What is the record (okay maybe two or three or four or more ) that influenced your music the most?

All of the 1960s Miles Davis Quintet and John Coltrane Quartet records. The revolutionary drumming of Tony Williams and Elvin Jones... as well as the visceral power of the music and the beyond-distinct instantly-identifiable individual voices and group sounds.

What was the first record you bought?

Eric Clapton Time Pieces There was definitely a classic rock influence from my dad, who played the drums in a rock band in the '60s, though it was Time Pieces because I had somehow fallen in love with the song Layla. I don't remember my dad having Clapton tapes. I remember him playing along to Rolling Stones, J. Geils Band, Men at Work and CCR.

What’s your favourite cover tune? (Song and covered by whom?)

My One and Only Love John Coltrane and Johnny Hartman - This was actually one of the 60s Coltrane records I wasn't deeply into already when I met my wife Sara. She loved it and we listened to it endlessly for years. We still put it on regularly. (Written by Guy Wood and lyrics by Robert Mellin, recorded by Doris Day and Andre Previn in 1962)

What is the record that you count as a guilty pleasure?


Sade, Lovers Rock Guilty because the electro/smooth jazz/pop vibe can sometimes be a little much. Lots of chord suspensions, etc., but seriously, I love Sade's singular sound. It's as distinct as Miles or Coltrane. As soon as you hear it you know it's her. Guilty pleasure also because the beats/loops are pretty clean and surgical. It's not really my approach to groove playing at all, but I love it nonetheless.

Currently, what’s your favourite record to listen to on the road?

Mbaye Dieye Faye, Rimbi Rimbi pop star Senegal. I just downloaded a couple of his records on emusic.com. I heard him live in Dakar and I studied with his extended family, one of the handful of famous traditional drumming families in Dakar.

Which of your records is your favourite?

Canada Day III (Songlines) and Canada Day Octet (482 Music), my two new leader records III is a continuation of my working group's concept, adventurous and accessible song forms with lots of different structures for individual solo voices to emerge.
Octet is another in a series of long-form compositions for medium-sized ensembles and the first time I've tried expanding my already-existing working group rather than building a new ensemble from scratch.

What’s the record you bought that you wish you didn’t?